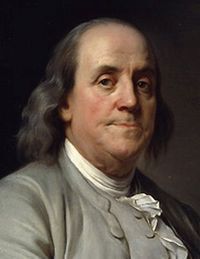 In 1789 Benjamin Franklin wrote his Last Will and Testament.

Benjamin Franklin was a very smart man who loved his country. We all know him for being one of the Founding Fathers of the United States of America. He was also the inventor of bifocals and made important early discoveries about the concept of electricity. You've probably seen Franklin's face on the $100 bill, which is particularly cool when you consider the fact that he wasn't even a US President. That's how important he was to America.

In his will, Franklin directed that after 200 years, half of the accumulated funds of his will, be set aside for a period of 200 years, allowing the principal to grow, untouched, over two centuries.  At the end of that period, a percentage of his bequest was to be used to benefit the cities of Boston and Philadelphia, the adopted hometown that he loved, and the remaining percentage was to be used to benefit the residents of Pennsylvania.  In 1992, the Pennsylvania State Legislature determined that the latter intention of Franklin’s bequest could best be met if the assets-by then totaling more than $2 million-were distributed among Pennsylvania’s community foundations, creating Ben Franklin Funds from which grants could be made in perpetuity.  Counties which do not have a community foundation are, for the purposes of the Ben Franklin Fund, covered by an adjacent county with a community foundation.

Gifts to the Fund can be made by submitting a check, payable to The ACCF -  Ben Franklin Trust Fund, and mailed to the ACCF, 220 South Jefferson Street, Kittanning, PA  16201.  Gifts can also be made via credit card by clicking the PayPal 'Donate' button below.  A PayPal account is not required to make an online gift to the Fund.